Sleep apnea can involve a lot of risks you might not know about. Although most people dismiss it as a mere set of quick episodes that usually result in falling back to sleep and then sleeping through the rest of the night without a problem, the possible complications of the disorder and long term development of more dangerous forms of sleep apnea can be quite debilitating and scary at times.

Knowing about these potential issues is important, since it will give you a fighting chance to prevent them and to live a more normal and empowered life, even if you did start out with a relatively serious form of sleep apnea to begin with. You will want to discuss snoring treatment and other solutions to sleep disruptions with a sleep specialist as soon as possible. 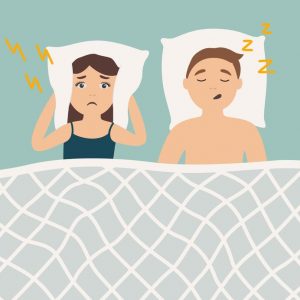 As you might already have read, sleep apnea comes with a great many risks. Sometimes it can lead to prolonged episodes where the patient stops breathing entirely during sleep, or their airways are blocked and they can’t get a single breath out for an extensive amount of time. As opposed to the short episodes that don’t even wake the person up, these can have far more dire ramifications.

For starters, the obstruction of your airways can lead to lowering your levels of oxygen and causing problems with your heart and cardiovascular system. Elevated blood pressure and a greater risk of stroke and heart attack can ensue, along with the long term side effect of developing a disorder such as diabetes, heart failure or irregular heartbeat. Liver-related problems such as various fatty liver diseases could also appear, along with the risk of developing obesity. Finally, even milder forms of OSA can sometimes lead to death, if your oxygen levels are too low.

The Risks of Central Sleep Apnea

Central sleep apnea is far more dangerous than OSA (obstructive sleep apnea) for a variety of reasons. First of all, CSA results not from blocked airways, but from a failure of the respiratory system to comply with the brain’s signals to inhale. Even though the normal signal to inhale exists, in the case of patients suffering from CSA, the neurological feedback system that’s supposed to trigger the brain’s signals doesn’t respond fast enough, and the result is often the inability to inhale for a certain period of time, during sleep.

If these episodes last long enough, the result can quickly become critical, both because of the lack of oxygen being delivered to the body’s vital organs, and because of the combination of sleep apnea and the presence of other disorders such as epilepsy, in which case seizures can often be triggered by CSA episodes.

In some extreme cases, central sleep apnea can even be lethal. While seizures and cardiovascular events don’t always have lasting effects, and the onset of a disease like diabetes, which can arise from the presence of sleep apnea, is still not necessarily a huge problem, the most important issue arises when the patient is in danger of experiencing sudden death because of sleep apnea. The danger of sudden death arising from CSA is greater than in the case of OSA because of the main cause of the disorder.

« What Questions Should I Ask Before Choosing An Oral Surgeon
What Is Y90 Radioembolization? »

« What Questions Should I Ask Before Choosing An Oral Surgeon
What Is Y90 Radioembolization? »